If you are a resident of the Golders Green Estate then the Association represents you! – whether you are a home owner or are renting:

We are a group of residents committed to bringing a positive change to the area.

Do get in touch! The easiest way of doing so is to email us at contact@ggera.org.uk.  Or, if you prefer you can reach those with a specific role:

This Privacy Notice explains in detail the types of personal data we may collect about you when you interact with us. It also explains how we will use that data.

What personal data do we collect?

We only ever collect the information we need or which you agree we can collect. This includes personal information that can be used to identify you, such as your:

How do we collect your personal data?

We collect only the personal information that you give us directly, for example, when you use our website or complete a form at a public meeting to, among other things:

How do we use your personal data?

We use the data we collect about you to help us to:

We use a third party provider, Mail Chimp, to deliver our newsletters and other information. We gather statistics around email opening and clicks using industry standard technologies to help us monitor and improve our communications. For more information, please see MailChimp’s Privacy Policy. You can unsubscribe from our mailing list at any time by using the unsubscribe link at the bottom of any email received via Mail Chimp or by emailing us at contact@ggera.org.uk.

We will not sell or give your data to anyone else unless we are required to do so by law.

You are entitled to view, amend, or delete the personal information that we hold about you. Please email any such requests to contact@ggera.org.uk.

1) It is in everyone’s interest.

2) The site is inadequate for waste management for Barnet and the NLWA.

3) The site is in the wrong location and puts at risk our most vulnerable.

4) The quality of the air we breathe is a hazard to our health.

5) The intensity of use harms our neighbourhood.

6) Our roads cannot cope with the additional load.

We are so sorry to report the recent death of our friend and neighbour, Mary Bennett, a long-term resident of the Golders Green Estate and for many years an ardent supporter of GGERA and the Memories Group.

We will treasure the many memories she leaves behind. Her funeral is on Monday 18 March at 1:00 pm at All Saints Church in Cricklewood Lane (behind the school).

We previously mentioned the electoral review of Barnet Council being carried out by the Local Government Boundary Commission.

The aim of the review was to recommend ward boundaries that mean each councillor represents approximately the same number of voters and to ensure that the ward boundaries reflect the interests and identities of local communities, as well as promoting effective local government.

The Commission has now published its draft recommendations and is inviting comments.  The consultation closes on 13 May 2019.

Have your say now.

The current (blue) and proposed (red) boundaries are shown below.

The Golders Green Safer Neighbourhood Team have passed on a couple of warnings:

Uniforms belonging to British Gas have been stolen.

If you are visited at your home address by someone claiming to be from British Gas without an appointment, do not let them in without checking with British Gas first on 0333 202 9802.

Keep your door securely shut, and if you have a door chain put it on.

Be aware of cold callers. If you’re not sure who is at your door, don’t open it. If you believe bogus callers are trying to access your home, call police on 999.

Check the identity of the caller by calling the company they are claiming to be from – i.e. gas, electricity, water or police.

Use the telephone numbers listed in your local directory or provided independently by your service provider or online on their website.

Do not use any telephone numbers provided by the caller – they may be bogus.

We have had numerous reports of thefts of catalytic converters that took place in the last month in Golders Green, Childs Hill and Garden Suburb area.

The main function of a catalytic converter is to clean up the exhaust gases from an engine before they exit the exhaust pipe. It is a small piece/filter that looks like a honeycomb that the thieves are usually after.

Cars that have been targeted include the Honda Jazz and Toyota Prius. The converters in these old models are easier to access. Thieves jack up the car and saw the converter end to end in around 60 seconds.

When stealing a catalytic converter the muffler is disconnected, so your vehicle will sound very loud. Toxic fumes will likely be easy to smell. The vehicle should not be driven without the catalytic converter and instead it should be towed to a repair shop.

At times, these incidents have happened in broad day light. The best prevention is to raise awareness of the issue in your community, to keep an eye on your road and to immediately report any suspicious activities by calling 999. 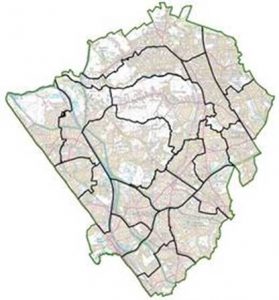 The Local Government Boundary Commission is carrying out an electoral review of Barnet Council.  The deadline for making comments is Monday 3 December.

The aim of the electoral review is to recommend ward boundaries that mean each councillor represents approximately the same number of voters and to ensure that the ward boundaries reflect the interests and identities of local communities, as well as promoting effective local government.